"I came into this world, in order to state, that it is not like it appears".

In memory of the most ingenious philosopher and scientist of this world: 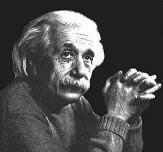 Who is God ? Part 3 - The Answer   ( Conclusion from the latest
scientific knowledge by Stephen Hawking's "The Grand Design", Nov.2013)

Remarkes to the Book "Does God exist?" by Hans Küng
( The tried answer to the God question of Küng is difficult to understand, Dec.2006 )

Praying in a double-blind trial
( A study in the U.S. examined the effect of praying in a disease process, Feb.2014)

Also a Pope may be wrong!   (Words and behavior of the Pope contradict themselves, Feb.2001)
(Here I speak from pope 'Johannes Paul II', who have died in April 2005-
appendix in addition see below "Statistic facts of the world population")

Pope Benedikt XVI. - The beginning of the end of catholicism?
( The true Benedikt on his oversea trip to Brazil 2007, June 2007 )

Without religion, there would be fewer wars!
( Current and past examples, April 2014)

Scientific bases:   Small introduction to the theory of relativity (Feb.2001)

Appendix to "Also the Pope may be wrong!" :  Statistic facts of the world population (Oct.2006)

Responsibility: the responsibility of this links stays only by the owners of this linked pages. Look Disclaimer ! Imprint:
Private Homepage of Ulrich Meyer
Heerstr. 59, 56329 St.Goar, Germany
E-mail:  umeyer.st.goar @t-online.de